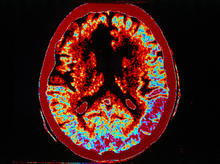 A stroke occurs when a blood vessel carrying oxygen and nutrients to the brain is either blocked by a clot and ruptures or bursts. As a consequence, part of the brain cannot get the blood (and oxygen) it requires, thus brain cells die. Stroke often results in (one-side) paralysis, loss of speech and cognitive abilities.

Due to their reported ability to differentiate into neurons and astrocytes to replace the  dead or injured  neurons, we utilize Mesenchymal stem cells, as a potential treatment remedy for stroke patients.

In order for us to assess the patient’s suitability for stem cell therapy we need details on the recency of the stroke, the level of disability and paralysis relating to the stroke, and specific information on the condition of the patient.

For suitable candidates we offer an  extensive treatment protocols for stroke  patients which includes the option of applying hundreds of millions of umbilical cord tissue cells,  or  harvesting and applying large quantities of   mesenchymal stem cells, usually drawn from the  patient’s own bone marrow. This treatment  includes other supportive treatments and therapies  with an aim to maximize the treatment effectiveness. Stem cells harvested from the patient’s own bone marrow will also be sent to a specialist COFEPRIS licensed laboratory for further cultivation, and differentiation for further injections.

Typically a stroke patient will spend a minimum of 5 days at our clinic.

As we explain at this link- these protocols are simply not available in the US and Canada and this is why we are in Baja California, Mexico.

What are neurodegenerative diseases or disorders

Neurodegenerative diseases include primary examples such as  Parkinson’s disease, Alzheimer’s, and amyotrophic lateral sclerosis (ALS). Stroke is considered to be a neurological disorder.

The underlying characteristic of neurodegenerative disorder or disease is a progressive loss of structure, function or number of neurons.